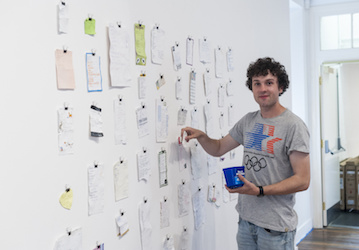 “My job has always been to throw them out but instead I always read them”: Melbourne artist Kenny Pittock.

Melbourne artist Kenny Pittock reproduced every detail of the 52 shopping lists he found discarded in a supermarket where he worked part-time.

“I’ve been collecting discarded shopping lists since I was fifteen, when I first started working in the milk section of a supermarket,” said Pittock. “Right now, I work two days a week for a different supermarket collecting shopping trolleys, and so over the years I’ve probably collected about two and half thousand shopping lists. My job has always been to throw them out but instead I always read them.”

In a statement, Redlands said: “His use of white earthenware that materially appropriates paper, and his painstaking attention to detail is extraordinary. The range of languages in the various shopping lists, the often intimate items the shoppers listed, and the occasional personal notes, are touching and, in a way, poetic.”

Judge Mark Harpley, head of Visual Arts at Redlands School, noted the humour in the work: “The interplay of the delicate earthenware permanently recording the ephemera of daily consumption and wasteful human nature combined with its intrinsic humour will ensure this work will resonate with and excite our students.”